It’s Not Just Talk, They Walk The Walk 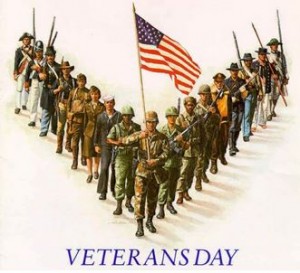 We live in a land where we cherish life, liberty, and the pursuit of happiness.  And we want to keep it that way.  We have one November day set aside to Honor Veterans.  In my opinion we should focus the entire month to honor the men and women who took on the pain, suffering, and sacrifice necessary to earn us what we have.

From the beginnings of settlement in this area, the desire to establish a self directed destiny has been demonstrated in the efforts of the people who came before us. Don’t think that our current standing began in 1836 with the fight to separate from Mexico. The mind set was present decades earlier as this region struggled to end the European rule of this area.  Mexico did finally establish independence from Spain.  Under Mexican rule, this area might have done just fine until the long reach of despots in control of that government chose to impose more control on this region than was acceptable.  Texans again declared and fought for their independence.

We all know Veterans.  The names are too numerous to list here, but we are beneficiaries of all of their efforts.  You probably know Benjamin Franklin Terry was a commander in the Civil War, leading a group known as Terry’s Texas Rangers.  Now we have a High School and another School’s Mascot in Fort Bend County named for his memory.  Did you know that Edward Cunningham was a Veteran?  As was Littleberry Ellis.  Both served in General Hood’s Texas Brigade in the hostilities of the U.S. Civil War.  All three of these men played a prominent role through the years in the development of the Sugar Land Plantation.

Last week, students and staff in Fort Bend ISD schools hosted various campus events to honor our veterans.  And Fort Bend ISD has Garcia Middle School, named to remember Marcario Garcia whose actions in World War II above and beyond the call of duty earned him the Congressional Medal of Honor, bestowed by President Truman.  Garcia was a resident of Fort Bend County when he entered service in the U.S. Army in 1942. 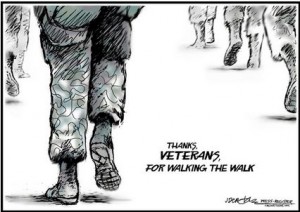 There are several organizations present in Fort Bend County for the benefit of our Veterans.  The Department of Veterans Affairs estimates there are approximately 22,000 Veterans living in Fort Bend County.  The Richmond VA Clinic, located out the southwest Freeway at Williams Way, is reported to be underutilized and apparently one of Fort Bend’s best kept secrets.

Here is where you can help.  The PTSD Foundation of America has Camp Hope in Missouri City providing hope and healing for the unseen wounds of war.  They can always use your support.  Other services available include affordable legal care for Veterans provided by the Fort Bend Lawyers Care organization.  And there is the Harris County and Fort Bend County Toll Road Veteran Discount Program.

So spread the word and help where you can.  And add thoughts and prayers to your Thanksgiving celebration for the Veterans that have enabled us to carry on with this special day.

1 Response to It’s Not Just Talk, They Walk The Walk