A Walk Back In Time – Updated

(Author’s Note:  Ongoing research by the author and a supporting research contributor indicates the lake initially identified in this article was not accurate.  Associated reference corrections have been made.)  In the news recently, Cullinan Park will be getting a new life.  This is 750+ acres of Fort Bend County land in the Sugar Land area in its natural state, looking somewhat like it did 180 years ago.  Thanks to an agreement between the cities of Sugar Land and Houston, and the Cullinan Park Conservancy, we will see improvements to the Park. The Conservancy will be doing some fundraising and The George Foundation will contribute part of the funding.  First Phase of improvements will include access to the property with nature trails and bridges, installation of a picnic pavillion and a children’s nature area.  You have probably driven by the entrance near the Sugar Land Airport off Highway 6 and did not realize it. 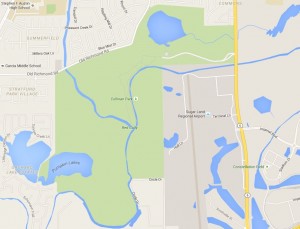 In the upper corner of the Park is White Lake.  More like a large pond, this lake still has the primitive appearance of an secluded body of 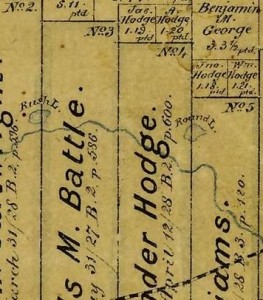 water, and it is rather old.  The lake is labeled Round Lake on maps drawn 150 years ago.  (Update: Round Lake is slightly east of Cullinan Park in Sugar Land and is currently known as Gannoway Lake.  A closer look at Original Land Grant Maps does not show the lake that is now known as White Lake.)  The map shown on the right was drawn to document land grants of Stephen F. Austin’s Old Three Hundred in Fort Bend County. This can be our walk back in time.

Round Lake (Now known As Gannoway Lake.) is divided by the line between the Alexander Hodge and S. M. Williams Land Grants that ran from the Brazos River across Oyster Creek.  (White Lake is divided on the line between the Mills M. Battle and Alexander Hodge Land Grants.) The Lake and Oyster Creek are connected at some level, or at least they were at one time. 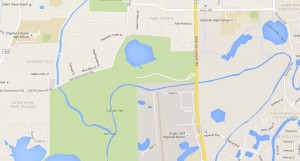 (Update:  A current map of the area is shown left for perspective on the locations of the lakes mentioned in this article.)

The S.M. Williams grant is mostly covered by Sugar Land today.  Hodges Bend Plantation, on the Alexander Hodge grant, was said to be a favorite stopping place for the likes of William B. Travis, Erastus “Deaf” Smith, and other persons of prominence in early Texas history.

his mini-map to view a larger map from 1873 (Update:  A later map from 1882 is used to replace the map shown with this original article.) that shows these Land Grants along the Brazos River.    Round Lake is on the map, as is the path of the Railroad that would bring growth to the area.  (Update:  White Lake is not shown on the Land Grant Map.)

In June 1836 Jesse H. Cartwright, another of Stephen F. Austin’s Old Three Hundred, had big plans as a realtor and advertised lots for a town located on Round Lake to be called Fayetteville.  Cartwright tried, unsuccessfully, to make this town the county seat of Fort Bend County in 1838.  Richmond was the winner of that selection and I don’t know yet if any of the town lots by Round Lake were sold.  About half of the lake is in the Hodge’s Land Grant. The other half is in the S.M.Williams Land Grant, which has its history in Sugar Land. 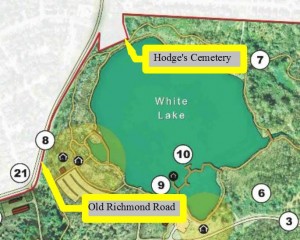 Adjacent to the upper corner of the Park property by the Lake, yet not within the park, is Hodge’s Cemetery. 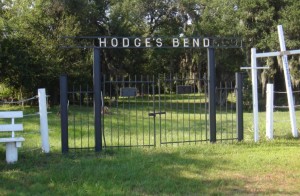 The Hodge family began this cemetery beside the lake in 1831.  Alexander Hodge, veteran of the American Revolution and member of the Texas Militia, was buried there in August 1836.  His wife had died earlier and it is said she was the first person buried there, in 1831.

There are other Hodge family and community members buried in Hodge’s Cemetery, perhaps 75 graves or so.  Many are marked with a white cross.  A few have grave stones.  With the easy access we have locally, I recently visited.  It was encouraging to see that there is maintenance and upkeep getting done on the grounds.  The grass is getting cut, and several large trees that had fallen were becoming stacks of cut wood.  This Pre-Republic cemetery is a bow on the ribbon of paths planned with the enhancement to Cullinan Park.  The Cemetery may not be connected by path to the Park but certainly deserves your consideration as it is the resting place for some of the earliest settlers to Fort Bend County.

The published illustration of the planned paths and facilities show great access and should give us an easy local escape to this Early Texas natural environment to perhaps imagine life in the area at the time of settlement by the local grantees of Stephen F. Austin’s Old Three Hundred. 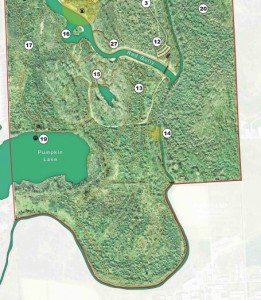 I look forward to the upgrades in the park.  And remember, this lake and the surroundings were walked by our early Fort Bend County settlers.  This is all food for thought as we enjoy Cullinan Park with a walk back in time, yet another gem of Fort Bend County.

Here are some images with descriptions of the numbered points on the Park map: 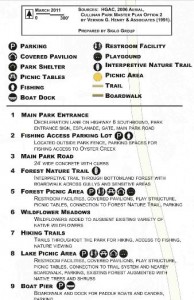 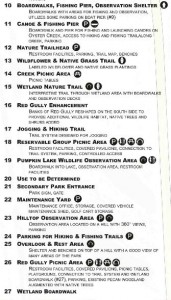