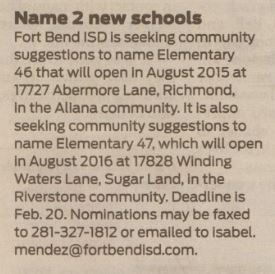 Two new elementary schools are on the schedule to join the existing 45 in Fort Bend ISD.  I happened upon a short article on the front page of the Fort Bend Community Extra edition of the Houston Chronicle for the week of February 5-11.  The article stated that Fort Bend ISD was seeking community suggestions to name Elementary 46, to open in August 2015, and Elementary 47, to open in August 2016.  It seems like a rather short notice for this request for community input as the deadline passed February 20th.  I did some reviewing of the current names in the family of Fort Bend ISD schools to see where the trend has been.  I am not certain who makes the final determination of a school name.

Among the existing 45 Elementary Schools, there are 13 named in honor of an individual. The other 32 have a name related to their location or neighborhood.  For the most part, these schools with location or neighborhood names tend to connect to the history in Fort Bend County.  The thirteen elementary schools named for individuals appear to have significant thought in their choice.  Five (or six) of the people honored with Elementary School names were educators or connected to FBISD.  The remaining seven are nationally known people who made a notable impact in history.  I had some difficulty trying to get some background for E.A. Jones (Jones Elementary) so I am not clear at this time of his connection.  If anyone out there can shed some light on him for me I would appreciate it.

Among the Middle Schools in Fort Bend ISD, seven of the fourteen carry names to honor individuals.  One is a former educator in the district, Mr. Billy Baines, one a resident of Fort Bend County and Medal of Honor recipient, Marcario Garcia.  There is an educator and astronaut, Christa McAuliffe, and several men who had a notable part in Fort Bend County and Texas History.  They are James Bowie, David Crockett, Alexander Hodge, and John Foster Dulles.

The eleven High Schools in Fort Bend ISD are predominantly named to honor individuals who influenced our history.  The two exceptions, Willowridge and Ridge Point, pay homage to the Blue Ridge Oil Field and salt mine in part of the county that influenced our development.

I believe the name selected for a school should provide a reminder for what we can accomplish or who can inspire us to be all that we can be.  I realize the posted deadline to suggest names for the two new Elementary Schools in Fort Bend ISD has passed, but perhaps you know someone who can still provide some input into this naming process. Let me know if you have any thoughts, questions, or comments.  I will be looking for news when the two new Elementary School names are decided.